It’s time for the 2019 Caucus!  Come run to be a delegate for the 2019 Democratic State Convention, which will be on September 14 in Springfield.  More information is available on the State Party website.

The North Andover Democrats will be joining the celebration at North Shore Pride this year! We welcome all to bring friends and neighbors, and join us as we represent our town in the parade. The parade and festival will be held on Saturday, June 22. We will meet at Shetland Park on Congress Street before the start of the parade at 12pm. Kids and strollers welcome! This is a fun event for all ages.

For more information on North Shore Pride and the related festivities, visit http://www.northshorepride.org/

If you have questions or you think you’d like to join us in the parade and want to stay in the loop on details, email NADTC Outreach Advisor Jenn Fresen at jennfresen@gmail.com.

Proceeds from this event support a scholarship awarded to a senior graduating from North Andover High School in 2019.

Use our secure ActBlue account to purchase your tickets online.

On February 15, North Andover Democrats gathered at Stevens Memorial Library to caucus and elect delegates to the 2018 Massachusetts Democratic Party Endorsing Convention.  The caucus was joined by candidates for local and statewide offices, including Setti Warren, and Tram Nguyen.

On February 15, North Andover Democrats held their caucus to elect 13 delegates to the Massachusetts Democratic Party Endorsing Convention that will take place at the DCU Center in Worcester on June 1st and 2nd, 2018. 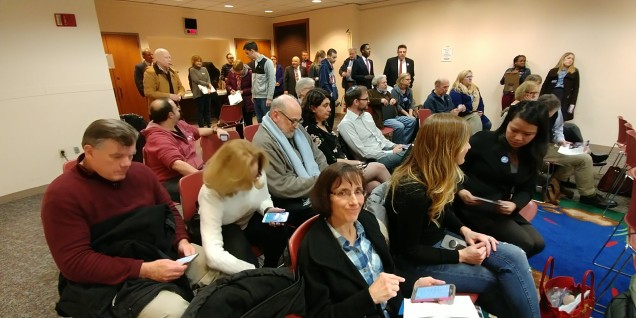 In addition to the 13 elected delegates, 4 alternate delegates were also selected. NADTC office holders qualify as ex officio delegates. Anyone interested in applying to be an Add-On Delegate can do so until March 23.

Congratulations to all the delegates and thank you to everyone who attended this year’s caucus!